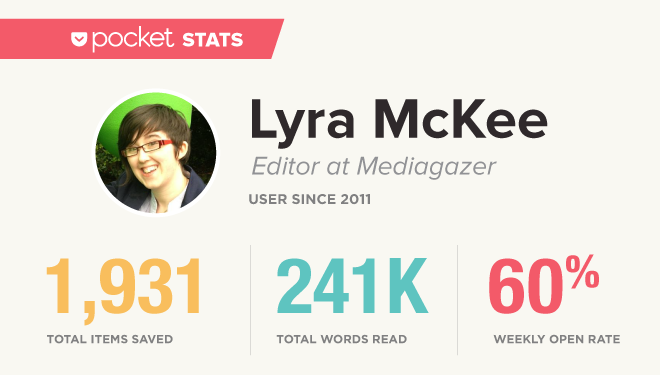 When Lyra uses Pocket:
“I tend to save a lot of stuff during the week and then read it at the weekend—it’s the only time I have for leisure reading! I also travel a lot, so it’s great for long-haul flights and waits at airports.” 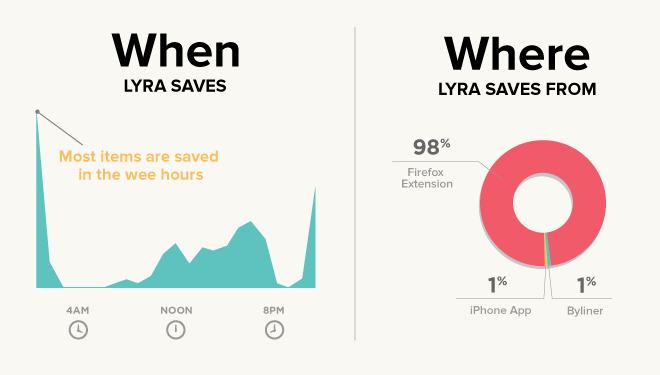 As the Ireland-based editor for the U.S.-based site Mediagazer, Lyra saves her content later in the evening, matching up with the Eastern and Pacific time zones. And more than half of Lyra’s reading occurs after 6 p.m. Belfast time.

What kinds of content are you saving right now?
“I love #longreads. I usually use Pocket to save them for the weekend. Right now, anything related to Syria or Yemen will catch my eye; there is some great foreign reporting coming out of those countries at the moment. I also like to save work from my favourite investigative reporters. The newshound in me loves a good scandal.” 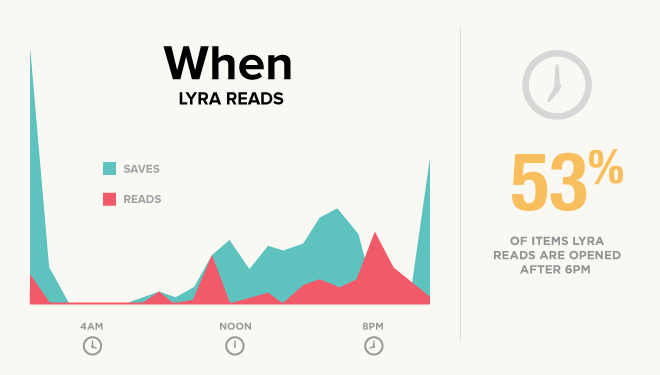 What apps do you use for reading in Pocket?
“I love Read Later, a desktop client for Pocket. Other than that, I use the Pocket iPhone app.”

“The New York Times does some of the best investigative journalism in the world. They really get what makes a good story, and their journalists have a talent for spotting hidden gems beyond what everyone is talking about on Twitter. I’m surprised Wired isn’t on this list but having said that, I read a lot of stories via my RSS feed. I religiously read Wired’s Danger Room blog and Jeremy Scahill over at The Nation.

“The Guardian features regularly in Pocket because of their phone hacking/News Corp. coverage; they’ve consistently led on that story and I’m a huge fan of their investigative reporter, Nick Davies. Their Ireland correspondent, Henry McDonald, also does some great coverage of Northern Ireland (where I’m from).”

How does Pocket help you with your journalism work?
“When I’m not editing Mediagazer, I run a small investigative news site, The Muckraker. At any given time, I’m working on about 3-5 stories. The nature of investigations is that you could make loads of progress on one, then get hit with a two-month delay due to government bureaucracy around releasing information. So then you’d switch to another story and progress with that for a while. I use Pocket to archive information I’ve found on the web that’s relevant to my hunt for the news. Given that I work on a number of stories at a time, it’s pretty damn useful, kind of like a little storage box of potential leads. I find myself using it more and more for this purpose.”