During the last week of September, Pocket was invited to Evernote’s EC3 conference. We were proud to be there among some of the most innovative companies in tech who are integrating deeply with Evernote, including Samsung, Autodesk, iHealth, Squarespace, and more.

Nate Weiner, Pocket’s Founder and CEO, spoke on a panel called “On Your Own Terms: The Future of Online Content Consumption” alongside some other influencers, including Rafe Needleman and Jakob Bignert of Evernote, Dave Winer of SmallPicture (and the creator of RSS), and Edwin Khodabakchian of Feedly. The panel was a terrific look at what some of the leaders in digital content aggregation and distribution are thinking and where they believe media usage is headed.

Pocket also hosted a booth at the conference and had a wonderful time sharing the benefits of Pocket to Evernote fans and developers alike. It was great to meet so many people who were already using Pocket on a daily basis, but also to introduce our product to new users face to face. Thanks to everyone who stopped by!

Pocket for later, then save forever.

It’s easy to share to Evernote from many of Pocket’s apps, including Pocket for iOS, Android and Mac. Just tap the Share button and select Evernote. In addition to simply sharing the link, you can add tags and select a specific Notebook to put it exactly where it belongs.

Here are some great ways that people are using Pocket and Evernote together:

Meet Ezra, a fan of Pocket and Evernote 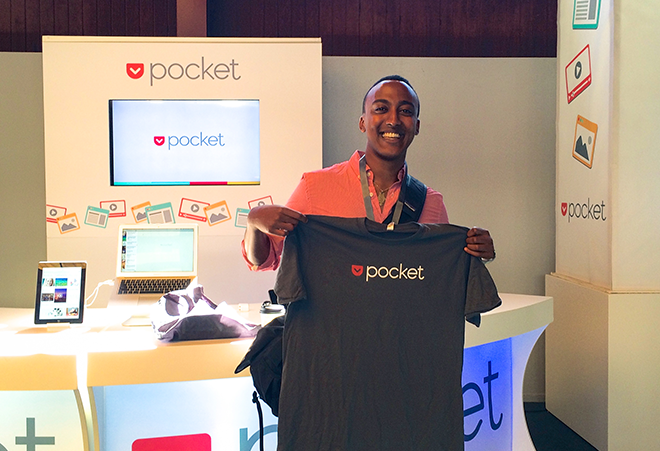 We had an extra ticket to give away, so we reached out to the Twitter community to find someone who loves both Pocket and Evernote. Ezra Kebrab, a recent Columbia Engineering graduate that made the move out to the Bay area to join the tech scene, won our giveaway and spoke to us about how he uses both services:

How do you use Pocket on a daily basis?

I absolutely love Pocket’s Google Chrome Extension. I’ll often take breaks throughout the day scouring blogs, newspapers, and social media and find great articles, links, or pieces that I want to read. Pocket helps me maintain efficiency during the day, so I’m able to find all these great reads but save them for later by simply clicking on the extension icon in the top right corner of Chrome. While I’m on the go, I’ll often send articles to add@getpocket.com from my phone. I also use it to help me clear out my browser because it’s not uncommon for me to suddenly open a dozen or more tabs.

What are the three most recent items you saved to Pocket?

I couldn’t agree more. I use an IFTTT recipe that sends any items I’ve saved to Pocket with tags “Learning”, “Work”, or “Entertainment” to the respectively named Notes I have in Evernote. Essentially, Pocket is my first line of filtering articles. Anything I want to refer to on a regular basis gets sent to Evernote. And everything else gets archived in Pocket.

What was the most interesting or exciting thing you discovered at EC3?

I’ve always been an Evernote fan, but I had no idea they were working to make partnerships with all these physical products. I think it’s great that they’ve embraced paper and partnered with Post-its and Moleskine. I love technology and software, but I think many can agree that there are certain tangible items like notebooks that’ll be tough to replace. I love that Evernote is working with awesome tech companies like Pocket and still branching out to make traditional products like sticky notes and notebooks.

Thanks to Evernote for inviting Pocket to EC3 and allowing us to discuss how we integrate seamlessly with apps like Evernote, enhancing both services’ utility. Thanks also to the attendees who approached us to discuss Pocket and to offer their amazing feedback.