By Coco Krumme and Mark Armstrong

Saving a story for later can tell us a lot about loyalty, longevity and quality—and it changes the way we think about the most popular stories on the web

If we’re to believe Woody Allen, “80 percent of success is showing up.” It takes more than just a great idea: you also need the drive and luck to be in a place where it can be recognized.

Allen is a writer (among other things), so one might wonder if his 80-percent rule applies to writing as well. How much of a writer’s success can be attributed to showing up in the right place at the right time—whether it’s on the front table at Barnes & Noble, the top of the New York Times bestseller list, the first page of Google search rankings, or the top of a person’s Facebook news feed?

And then: What happens after they show up?

Read It Later has a unique dataset to explore these kinds of questions. Over 4 million users rely on Read It Later when they click the “read later” in their browser, tablet or smartphone—and they come back to our app to dig deeper into the stories they’ve saved, recipes they’ve discovered, or videos their friends have recommended. That means Read It Later users aren’t just drive-by visitors to a piece of content—they’re passionate about it. The content is important enough that they added it to their queue so they wouldn’t miss it.

Earlier this year, our founder Nate Weiner offered a revealing look at how “time-shifting” online content has changed our reading behavior. Here, we take a closer look at the most-read authors on the web.

First, a quick note on the data: We take user privacy very seriously, and all data is anonymized and scrubbed of any identifying information before it is analyzed by our team. For this piece, we examined stories that were saved over a six-month period from May 1 to October 31, 2011. If you see any issues with what we’ve presented here, or have suggestions on what else we could investigate, please drop us a line: trends@readitlater.com.

So… Who Are the ‘Most-Read’ Authors on the Web?

Back to Woody Allen and that remaining 20 percent: Once a reader shows up, does it matter if anyone actually reads what someone has written? Sometimes it seems like what gets read is an afterthought. But often, it’s just too difficult to know what a reader does with a story after they’ve clicked through on the web, or purchased it in a bookstore.

We examined two things: How often our users clicked “read later” on an author’s story, and how often they returned to that story in some fashion.

To give some perspective, Read It Later users clicked “read later” more than 47 million times from May through October of this year. Here’s how that total breaks down over a six-month period: 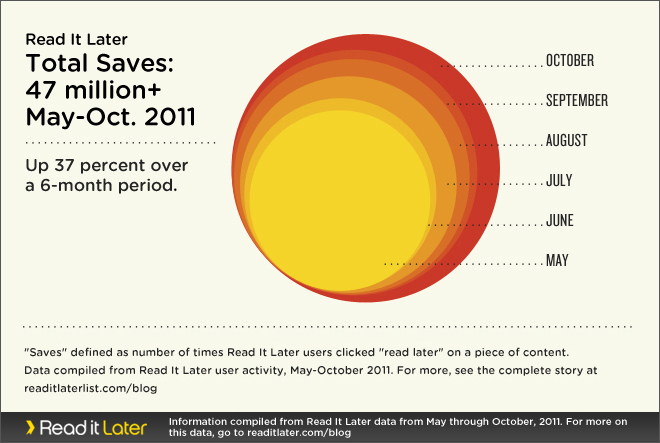 Who were the most popular writers during this period? A quick glance shows that our readership is highly practical…and (surprise) big on technology.

Nine of the Top 10 most-saved authors inside Read It Later are writers for Lifehacker, the must-read blog for lifestyle design. This makes sense, given the useful, evergreen content their team produces every day—it’s a natural for how-to and instructional content that readers might find and want to come back to. Kevin Purdy, Adam Pash, Gina Trapani and the rest lead Read It Later’s most-saved list, followed by a who’s-who of tech blogging—including Jesus Diaz of Gizmodo and MG Siegler of TechCrunch—and big-name writers like Cory Doctorow of Boing Boing and bestselling author Seth Godin. Read It Later users are also an international bunch: Japanese tech writers like Engadget’s Ittousai also made the most-saved list.

While pure popularity is great, we also want to know more about other factors that make content valuable—like longevity and loyalty. It’s not just about how many people clicked the first time—it’s about whether they also came back again.

To examine longevity and loyalty, we also looked at the top “return rates” for authors with over 1,000 saves. That is, what was the percentage of Read It Later users who returned to that story in some way? (There’s a lot more to explore around exactly how much content readers consume, or how far down they get in a story, but we’ll examine that in a later post.)

The most interesting thing isn’t just that we found different authors for the top “return rate,” but also different categories of content and types of publishers. Top saves were focused on how-to and tech content (a likely side effect of our largest user group being early tech adopters—because, hey, even at 4 million users, we’re still ‘early’), but the authors with the strongest reader loyalty included writing about sports, general news and gaming.

One constant across both charts: Nick Denton’s Gawker Media properties (Lifehacker, Gizmodo, Deadspin, Gawker) are among the most popular any way you cut it.

Daily bloggers are well-represented in the above data, but we also get this question from publishers quite a bit: “How does long-form content perform?” After all, with time-shifting and mobile devices, couch reading has never been better.

For this question, we took a different approach: The above charts are based on pure volume of articles saved, so that rewards the most prolific bloggers and tends to under-recognize those writers who publish longer pieces less often. But that doesn’t mean they are “showing up” any less. Those who channel their energy into fewer, but longer posts, can see the same great payoff.

Tsotsis is a prolific blogger: RIL users saved thousands of different stories with her byline over a 6-month period. Contrast that with the rest of the group: Grigoriadis and Bissell’s output is almost the polar opposite—they don’t publish as often, but when they do, it’s in bursts of epic 4,000-plus-word pieces. (See Grigoriadis’s recent “American Drug Lord in Acapulco” with Mary Cuddehe for Rolling Stone and Bissell’s longform video game review of “L.A. Noire.”)

You can see the differences in story output here:

Tsotsis wins for pure story output, but when you look at average word counts per story, you see the rest of the writers make up ground: 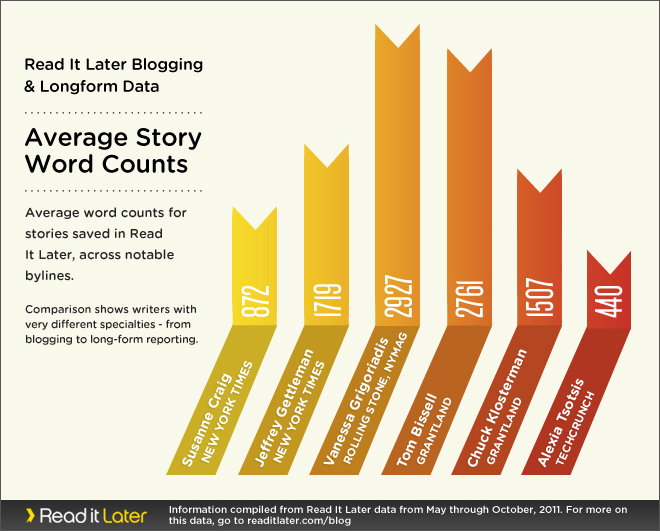 Now let’s examine the “return rate” for each author. What we find is that they’re all much more alike than we first suspected. They’re all well above-average when it comes to readers returning to their work:

This comparison can be apples-to-oranges: For instance, Alexia’s work is shorter, and there’s a possibility that she’s more likely to be read immediately. But what we’re seeing is an important new way to judge the quality of content, from the standpoint of loyalty to an author and longevity (or long-term usefulness) of their content.

The New York Times and the Best of Both Worlds

Meanwhile, a publisher like The New York Times has embraced both worlds: They have many bloggers on staff, but also investigative and longform reporters who spend months on a project. How do their authors stack up? Let’s look at their most-saved authors inside Read It Later: 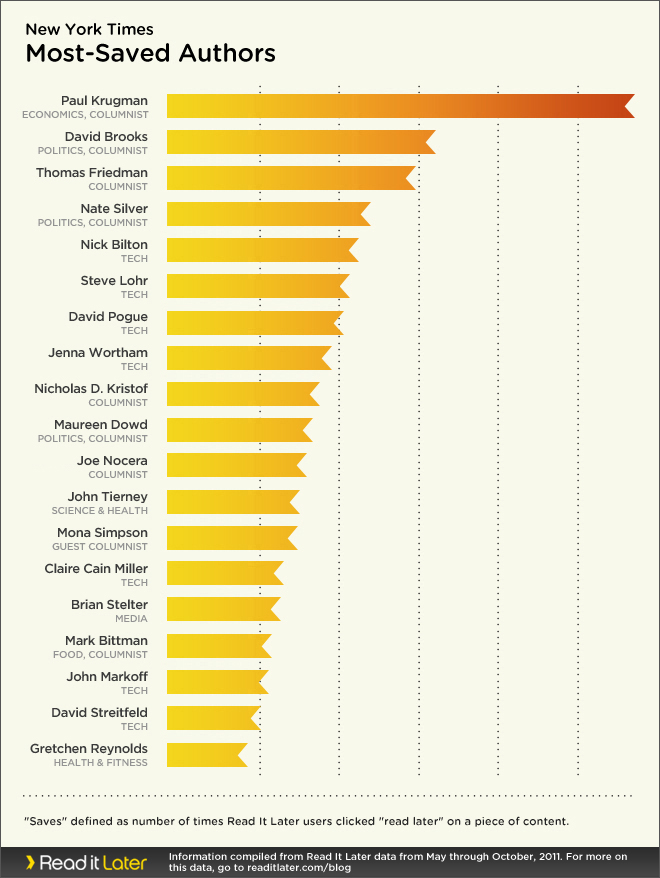 Top Times saves: The list includes a cameo from writer Mona Simpson (who was featured for her heartbreaking eulogy for brother Steve Jobs).

Name-brand columnists, tech, politics and media are the big winners here. Columnist and economist Paul Krugman was the most-saved writer at the Times from May through October, followed by his Op-Ed columnist colleagues David Brooks and Thomas Friedman. The next most-saved came from the Times’ blogs: FiveThirtyEight data geek Nate Silver, then four Times tech writers: Nick Bilton, Steve Lohr, David Pogue and Jenna Wortham.

Do the names change when we look at the highest return rates for the Times? 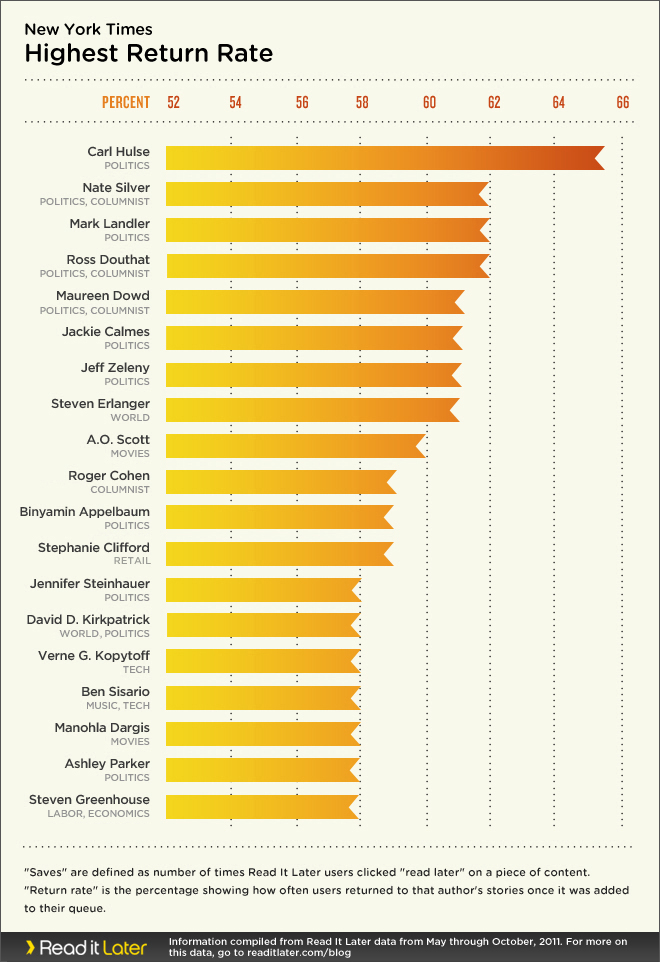 Keeping Track of What Matters

There’s a lot of debate right now on the web about quantity versus quality—tracking quantity has always been easier than understanding the power of quality. We think there’s an important conversation to be had about how we use metrics like longevity and loyalty to better understand what’s important to readers.

Bloggers, long-form writers and how-to columnists all bring unique value to what they publish. They can operate on a different metabolism, so what’s important is whether readers keep showing up to enjoy your work, whatever form it takes.

Woody Allen, by the way, had a 42 percent return rate for his stories in Read It Later. I wonder how his films do?

Next: Get a sneak peek at Read It Later 3.0, coming soon for iPhone/iPad, Android and Kindle Fire.