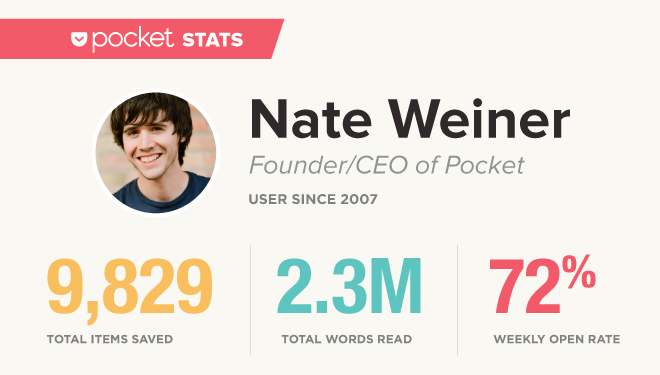 Today we’re introducing a new series called What’s in My Pocket, in which we spotlight Pocket users who share their reading and watching habits with the world. We’re kicking it off with the person who started it all, Pocket founder Nate Weiner (@NateWeiner). 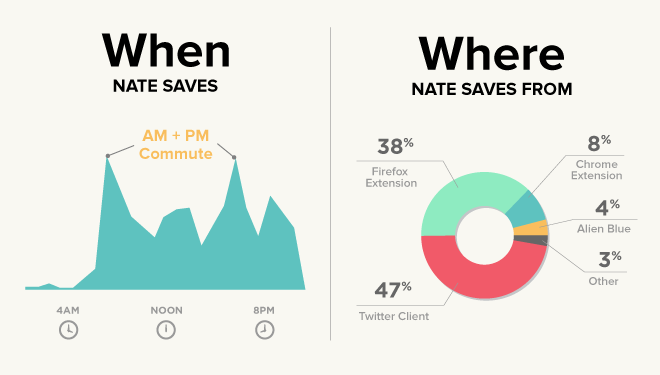 Where he saves:
Nate saves most of his content from a Twitter client (47% of items come from there), followed by his Firefox Extension (38%). (Incidentally, Pocket was first created as a Firefox Extension.)

When he comes back to his saved items:
“I do most of my reading on the [San Francisco] Muni in the morning, and most of the time at night I’m watching videos—on the Pocket site or on a tablet. I do a lot of my video consumption while I’m eating lunch or dinner, on a desktop computer.” 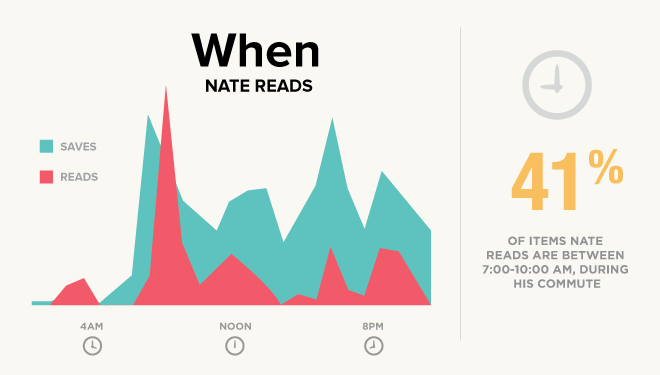 On watching video in Pocket:
“I speed-eat, and usually there’s one video I’ve saved that’s like 10 minutes, so I can go through it. Video is a hands-off thing, so it’s nice for those moments. A lot of the video content I’m saving is from @PocketHits, Vimeo Staff Picks and time-lapse photography from the Dynamic Perception guys. There’s longer stuff, too, like TED Talks. I’d bet 90 percent of my video consumption happens after 6 pm.”

What’s the last thing he saved?
“I just saved a video from PetaPixel called ‘A Simple Explanation of F-Stop Numbers’ that Justin [Pocket’s Community Manager] had shared on Twitter.”

What’s the last thing he came back to?
“The last article I read was The Verge’s feature ‘Apple v.s Samsung: inside a jury’s nightmare.’ ”

Would you like to see your own Pocket stats and get featured in this series? Drop a note to mark@readitlater.com