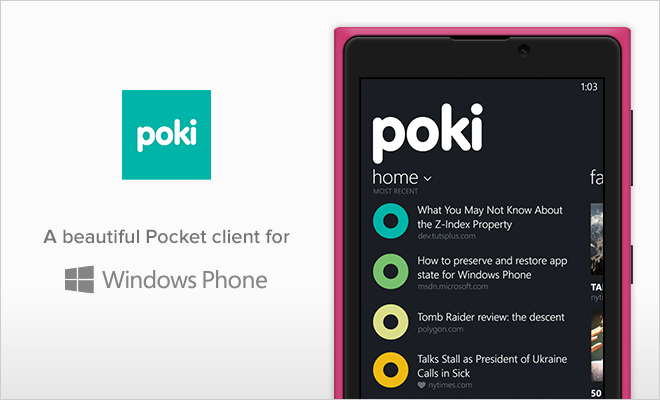 We’d like to take a moment to introduce Poki, a beautiful third-party client that recently debuted on Windows Phone. It was met with fantastic reviews, and The Verge was so impressed they named Poki as the Top App of the Week.

We caught up with Poki’s creator, Tobi Klika, and talked about skateboarding, where he finds his inspiration, and what it was like developing his first Windows Phone app.

How did you first hear about Pocket and what made you want to create your own Pocket app?

I heard about Pocket on a news page in the App Store and it was called Read It Later back then. I started using it as the new design rolled out, which made the service even more interesting to me. In the middle of 2013, I started creating my C# library – PocketSharp – with the goal of learning as much as I could about the programming language.

Working with the Pocket API was a great decision as it’s consistent and easy to use. With the first major release of the PocketSharp library I thought about creating an application which allows you to consume it. And as I’m a huge fan of Windows Phone and had already created the C# library, it was a no-brainer – Poki is my first and only app right now.

Are you working on anything outside of Poki?

I’m primarily a web developer (mostly UI/frontend) and contribute to open-source as much as I can! I’m currently in the transition to getting self-employed and starting my company, cee, which will be all about Web & Windows Phone apps.

Wow! How do you manage all of that?

Well, it’s not that hard in the winter, as I can’t go out skateboarding either way (which is what I typically do with my spare time). And over the course of this past year, I reduced my working time to 26 hours per week to have more time to establish my work on my private projects and eventually start a company.

Poki’s launch was met with a ton of great feedback. What about the app are you most proud of?

I ignored the common wisdom that releasing applications as fast as possible is a good thing. It took me 5 months to get the initial version of Poki out into the wild, and it was the best decision I could have made! For me every detail has to be perfect, every pixel has to fit. Poki would have never been such a success if I had pushed it earlier.

So, what are the 5 most recent items you’ve saved/read in Poki?

That’s going to be funny. My most recent items are just for debugging purposes.

My newest “real” items are the Poki article by The Verge, two articles about Visual Studio, one about SATA Express (PC Hardware) and the “First Human Ever To Run A Loop-The-Loop.” Check it out, it’s insane: http://airows.com/first-human-ever-to-run-a-loop-the-loop/.

The most important thing is that you understand the operating system you want to develop for – you need to get a feeling for the interface, the controls, the whole ecosystem. I have been using Windows Phone since it was released (fell in love with it) and being a developer made it easier to get started as well!

I watched a lot of introduction videos in the beginning, played with the controls and learned how to customize them. In my opinion it’s a common mistake that developers are releasing their applications with the sole purpose of delivering functionality. Functionality is important, yes, but user experience is as well. And that’s what a lot of apps are missing (at least on Windows Phone).

When it comes to your work, where do you find ideas and inspiration?

There is a lot of inspiration floating around on the internet. I for myself use Behance and Dribbble a lot (I was a designer before I became a programmer). But it’s not only great designs and photos which inspire my work, but also architecture and nature with its colourful nuances.

When it comes to programming, I read a lot of source code from open-source projects and spoke with other developers, as well as being active in the community. This broadens my mind and helps me find new and creative solutions for my engineering problems.

Tobi, thanks for taking the time to chat with us, and congrats on such a fantastic launch for Poki!

If you’re a developer reading this and are interested in bringing the power of “save for later” to your users and applications, check out our Developer Page to learn more on how to get started.